I was in Bangkok last week attending a conference.. while the meetings were nothing to write home about, the parties and all the masti certainly were. I was let down in the shopping department big time! Too many fakes, high priced low quality stuff and a bad attitude towards Indians... add a sultry weather to that and phatttt goes the shopping...

So, this conference is a big affair in my company and vain girls like me obsessed over our outfits and look the entire time. I know everyone does it... only few admit it! This is also the time Indian girls wear a lot of dresses and skirts, things that we don't normally wear in India, specially when we take public transport...

So here are my looks from my time off and the parties :)


This is me after a whole night of waiting for the flight and then travelling. Those denim capris are the most comfy i have ever worn and am so glad I picked shoes over flipflops at the last minute. My feet were very thankful :)

You see the paintings behind me? Those were some large murals that adorned the walls... I had to get a pic... :)

We arrived at the wee hours of the morning and left as soon as the malls would have opened. I changed into a fresh shirt and put some makeup on... got fried in the 20 minute commute... it was H.O.T!

This is MBK mall, erstwhile shoppers paradise... now filled with junk! I felt so sad to see the novelty taken out of the shopping. I guess its still cheap for the west but it is at par with what we get in India now.

Although a lot of people visit MBK to sample the eye candy. I can bet that most Indian men do it. Why else would they be roaming around idly in a mall that sells women's clothes, shoes and bags?


The cruise was a windy affair. I opted for a black jacket and tights with pulled back hair. My makeup was minimal and i am berating myself for leaving my concealor at home. I just wanted to avoid an oil slick by the end of the evening and so the emphasis was on mattifying. What do you girls think?


For the final evening, I wanted a fuss free look. Something that'll allow me to dance all night long without a bother. I kind of achieved that with the blow dried hair and my shirt worn over the jacket!

Yep, a transparent jacket goes over the sleeveless silk top but i reversed it to let the pretty embroidery show. I am wearing the same top here the correct way!

I went in with loads of highlighter and shimmery blush and got a fake glow :P Oh and am proud of the custom lip colours on both days. Didn't I tell you? On the cruise day, I wore MAC Lip Pencil in Spice under Faces Lip Pencil in True Red and topped it off with MAC Twig. For the final evening, I wore Maybelline Hooked On Pink under MAC Cosmo. And my liner here, is blue.. not black ;)

I got some falsies for this event but contracted an infection :( am not even wearing Mascara :(


What happens when you party till the wee hours for four days in a row, eat and drink like crazy and do absolutely no physical exercise save for dancing?
You Bloat Up! Like crazy... all that beer and vodka... all those entrees and burgers... all those fries and colas... and the delectable desserts... oh, where was I? Yes... enjoyable as they are, they show up immediately and I looked pregnant the next morning! Heavily pregnant... someone even asked me! How mortifying!!!

That's the preggers look on the right....! The fun part is, I was actually pregnant ( 5 months) on the last trip two years ago and not many people knew... not many found out! If that isn't a cue to lose weight... what is? 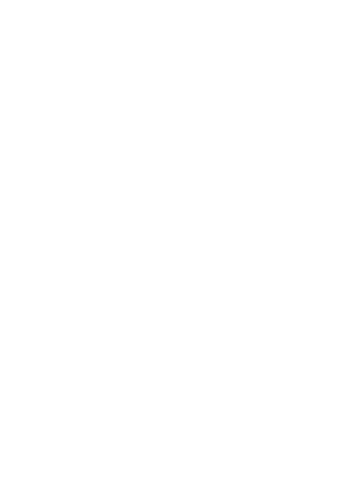 Email ThisBlogThis!Share to TwitterShare to FacebookShare to Pinterest
Labels: Personal


I won the Lotus Herbals Mother's day contest and they sent me a hamper. The hamper contained Lotus nail paints and I must admit that I am in love. Not puppy love but true, everlasting love. These nail paints are that awesome!

Check out the swatch below. My apologies for the blurriness. It is a phone camera.

What Lotus Says
ColourDEW™ is a range of 10 exciting Nail enamels all together in a new packaging. Natural and safe, Acetone, DBP and toluene free, Fast drying, Flat and sturdy brush. Smooth application

What I Think
I got strawberry shake in the hamper and within 2 days I bought Candy Drop. Both shades have amazing pigmentation coz one swipe gives decent coverage and dry in a jiffy! Perfect for those who are always rushing or running after a toddler!
Don't even get me started on the lasting power. I went 5 days without a single chip wit strawberry sparkle! F.I.V.E whole days... a boon for lazies like me who do their nails once a fortnight or only on special occasions!

What it Costs
Used to be 99 a pop for the longest time. Now, they have increased the prices to INR 110. This still goes cheaper than Lakme Absolute and Colorbar. Though at par with regular Lakme and Maybelline Colorama, the quality beats them by a long shot!

I went over to the only MAC outlet in Kolkata last weekend and was so freaking overwhelmed that I did not even remember the shades I wanted to check out. Didn't help that the SA wasn't warm. In fact, she seemed totally stressed about something! Maybe she was just having a bad day...

So, I decided to make a list of all the MAC goodies I wanna try out.

Foundation: I am NC40 and totally love my Studio Fix powder. But I do feel the need to have a liquid foundation on hand sometimes. Since I have burned my hands with all foundations but MAC, I want all my foundations from MAC only. Oh and before you think I am the dumbest beauty blogger who forgot this, lemme tell you that I am tanned so bad that I cannot even think of buying a foundation at this moment


Lipstick in Mocha: Ever since I saw Rati sport it in this post, I love this shade. Though lord knows I do not need another Brown / Nude in my stash! But look at the colour peeps, how could you not love it?

Lipstick in Amorous: I love this shade because it sits in that perfect place between nude and bold. Its bright, but not too much. I saw this at Rashmi's blog and it was an instant love! I did swatch this at the store though and found it a tad dull for the coming summer months. What do you girls think?

Lipstick in Craving: Zara totally deserves the credit for this! I swatched it in the store and it looked amazing :) The only reason I didn't pick it up was because I knew I was forgetting some shades. I later remembered Mocha :p

Eyeshadow in Expensive Pink: Given that I wear eye shadow only on special occasions, this is a lovely shade for me. I think it will go with any Indian attire and I can simply use it as a wash over the lid and use a coloured liner to finish off! Again, I need to thank Rati for this gem. This was out of stock :(

MAC Lip Erase: A wonder product that erases the pigmentation and allows the real colour of the lippie to show thru? Sounds like the answer to my prayers!!


By now, all you guys must know I am a lippie gal.... I prefer my base to be of sound quality and long lasting. For colours, I quite like the drugstore products. But these lippies made to the list because they are quite unique (IMHO). I'd love to have these in my stash :)

Am trying to get my blogging mojo back so bear the nonsensical posts for a while. Yeah, I am talking to my maybe ten loyal readers out there!!! :)

I love the effect of tightlining on my eyes but am terrified of doing it. A klutz like myself will end up poking her eye all the time. Not to mention the fact that pulling up the lid will cause sagging. So, I cheat!

To tightline, I line my lower lashline heavily and shut my eyes immediately. I blink a few times till the kohl transfers to the upper lashline and repeat this process a few times. Voila, tightlined eyes :)

Lipglosses may be my flings, but Lipsticks will remain my true love forever!


Realised this after spending lotsa bucks on Maybelline Colorsensational gloss in Hooked on Pink (Yes, I have the lipstick too. No, I haven't tried the combo)

Lotus Seduction gloss in Lychee Sqaush (gave it away) and an Incolour Gloss.  Most of my glosses are unused. I had bought 4 tubes 4 years ago for my wedding. Gave them all away. Now, I am on a mission to finish up my glosses. So far, have only managed the Elle 18 one. Wish me luck!

With my vacation in Goa which left me quite tanned and the deadlines at work, I haven't been able to blog much lately. I have even missed out on reading my staple! But things will continue to be crazy for some more time I expect...

Anyway, this announcement was due in the first week of March. Sadly, the enthusiasm went down due to the withdrawal of glossybox and them gifting vouchers instead. I wish they'd come back soon and we do have another beautybox in the Indian market.

Anywhoo, so I did this a few days back and informed them about the winner. Its time to tell you guys too :) 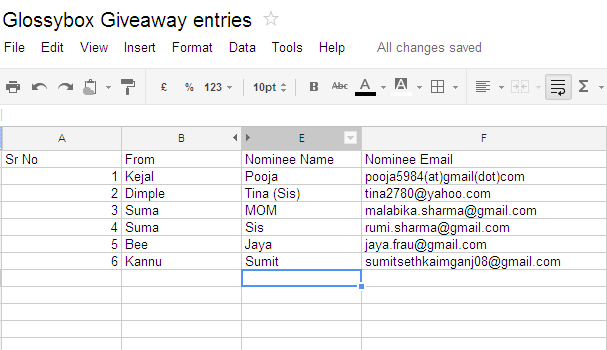 So you can see that I had 6 entries. A big thanks to all of you who participated. And Random Org picked.... 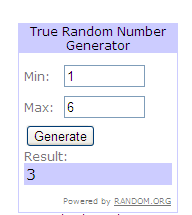 And so the winner is Suma's Mom! Congrats to both of them :)